I asked my students in Wing Chun Kung Fu if they would write a little about how this discipline has helped them, here are Eric & June.
First Eric's: 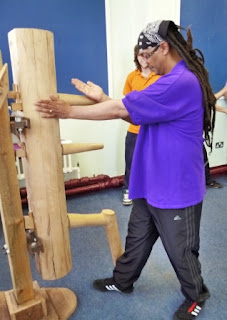 'I suffer from an old injury of a prolapsed disc which happened back in 1999. Periodically my back will completely give way leaving me completely and utterly incapacitated. This means that I can't use toilet facilities, stand up, etc without the pain being too intense.
My GP visited me, as well as the pain relief nurses from the main hospital, and prescribed me Morphine and Valium tablets to reduce the pain and relax my muscles.
The reason this happens is due to stress. If I'm under an inordinate amount of stress then the muscles in my back tighten to an extent that I only have to bend from the waist and my back will give way.

'Recently I took on a job negotiating contracts for some business companies. All went well until I heard later that one of the companies had dismissed most of its work force, keeping a skeleton crew and employing non local workers in an effort to save money. I felt awful about this although I know it's just part and parcel of how business is done, but I still felt bad for all the families that suffered due to people being laid off. I have now refused anymore work as my health and moral compass is far more important to me than making money! '
Normally I am incapacitated for weeks even months, but due to what I believe is down to the Wing Chun, I have about 90% recovered in the space of under two weeks.
Once I could stand again I also tried to do the breathing/stress exercises that you showed us both. These helped, but I really feel the Siu Lim Tao and very gentle level one warm-ups are what have helped me recover so quickly. My GP also believes that this is the reason as well and I have given her the link to the Tse Qigong Centre and your website, as she is interested from a medical point of view as to the values of Qigong and Wing Chun.
I have done 30 minute Siu Lim Tao's everyday for the last few days, and I feel so much better for it. 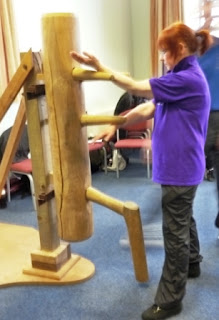 'In 2005 I suffered a serious industrial injury; this resulted in a displaced fracture of the pubis ramus bone, broken right arm, and severe problems with my right knee and hip leaving me unable to walk without the use of a walking stick. The problems and pain associated with my hip and knee were considerable, and I was given very strong painkillers to alleviate the problem. The problem with my right knee ended up with me having to have an operation on it in 2006 to remove cartilage, and scrape the interior of the knee-cap.

Since my youth I have always needed the aid of inhalers as I suffer terribly with asthma, especially when Rapeseed is in flower. I began Wing Chun classes in June 2011, and in the subsequent time since, the pain that I continually had in my hip and right knee has improved so considerably that I no longer need the aid of a walking stick to assist me in walking without pain. I also suffer from Tennis elbow and a trapped nerve in my left shoulder. I was also extremely unfit, and couldn't even touch my toes.

Now I use my inhaler maybe once a week at most, sometimes longer. My Tennis elbow has alleviated, and I very rarely have any problems with the nerve trapped in my left shoulder. Most of all my fitness and stamina levels have vastly improved, and like Eric, none of this is anecdotal evidence, it's plain to see from how unhealthy we both were, to how incredibly healthy we've become in the short space of a year. It is Wing Chun that has led to this outcome, and it's something that we both never give up, now knowing the health aspects...physical as well as mental.

Posted by Sifu Natasha Etheridge at 08:38

Sifu Natasha Etheridge
I have been studying Wild Goose Qigong since 1998. A few years later I began my journey with Chun Yuen Quan and Wing Chun Kung Fu with my Sifu Mike Baker, senior student of Master Michael Tse, my Sigong. I've been teaching Wild Goose Qigong, Chun Yuen Quan and Wing Chun Kung Fu for ten years in Beccles. My health and the quality of my life has improved significantly since practicing Qigong and Kung Fu and continues too.It gives me good health,strength and enjoyment to living.